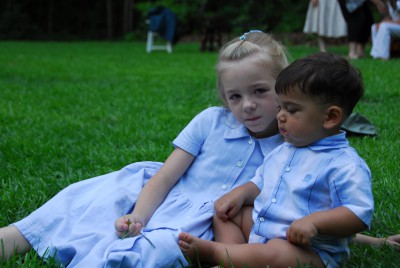 Children need a very good reason for studying the scriptures on their own, and one of the best motives is to acknowledge that God created this world. That takes a lot of proof even though they already believe it because they have been told many times. The more scriptural reasons children have, to believe God created the world, the more faith they will have. Consider what Jesus did in giving a prophecy concerning Judas—so the apostles would believe.

“I speak not of you all: I know whom I have chosen: but that the scripture may be fulfilled, He that eateth bread with me hath lifted up his heel against me. Now I tell you before it come, that, when it is come to pass, ye may believe that I am he” (John 13:18-19).

All but Judas already believed that Jesus was the Christ. Nevertheless, Jesus specifically stated that he was telling them that he knew he would be betrayed, which was yet another fulfillment of scripture. We may wonder how or why, but each reason, small or great, increases faith. Thus, the more scripture we show that God created the world and controls it—like he taught Sennacherib (Isa. 10:15) and Nebuchadnezzar (Dan. 4:17; Dan. 4:25; Dan. 4:32), the more faith the children will have. Then, it is time to teach them that God made this world for Himself, not so we could play and enjoy it (Acts 17:23-28). Again, the more scriptural reasons and evidence they have, the more reason they will have to seek God’s purpose for creating them. Then it is time to give the evidence that God created man so they would seek him (Acts 17:27 specifically) so they could find out what the Creator / Owner has planned for them to be and do. Of course everyone, adult or child, needs this lesson, and like Peter said—they need to be reminded constantly (2 Pet. 1:12, 13, 15; 2 Pet 3:1, etc.).

Hannah’s daily work with Samuel was to start with his learning and understanding all of God’s word!  Before she did that, she had to give him many testimonies from scripture that God is the Creator, Owner and Upholder of the universe and all life on earth (Rom 1:18-23).  He had to agree and love that truth (2 Thess. 2:1-12) and determine to be ‘fair’ in living in a world that someone else owned.  Thus, he had to determine not to do anything without having authority from the owner (John 5:19, 30).

For David not to turn aside from anything the Lord commanded him all the days of his life, his mother must have first taught him that he was in a world that belonged to someone else and that to be fair he should do nothing without authority from the owner.  How else could David know all the commands of God and have a heart that was determined to submit to the Creator / Owner in literally everything he told him to do?  Those are basics for every soul who knows and loves his Creator.

Knowing God is to know not only that he is (Creator / Owner) but to willingly do justice (Hebrew – righteousness – which is to obey laws) and also follow all of God’s judgments.  God testified of Abraham:  “…. did not thy father eat and drink, and do judgment and justice, and then it was well with him?  He judged the cause of the poor and needy; then it was well with him: was not this to know me? saith the Lord” (Jeremiah 22:15-16).   Thus, to know God is to know and accept that he is (Heb 11:6) Creator and thereforre Owner, but to be fair in living in someone else’s house (world).

Our children need to understand that even though God ‘gives’ this world to man to use, He still claims complete ownership (Psa. 24:1).  He claims ownership of the entire universe, and everything in it including every soul of man that exists (Eze. 18:4).  Any child who is deceived into thinking that this world belongs to him and that he has ‘rights’ will never serve God.  If a child has any right at all, who gave it to him?  If the Creator / Owner does not give something, no man can receive anything…unless it is given him from above (John 3:27).  The world claims its rights, but they are deceived.  No one has authority in himself unless it comes directly from God (John 19:11).  If our children understand these things they have a good chance to know God.