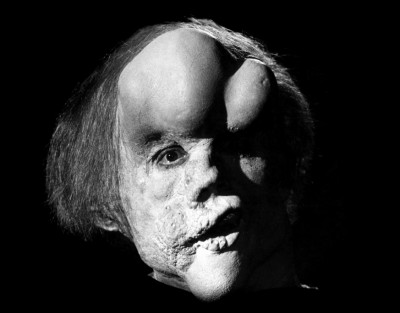 Probably the most pitiful, heart-wrenching sight I have ever witnessed was a little girl about three who suffered from some type of aging syndrome.  Her baby sister was a normal toddler going here and there.  The parents were brave enough to carry both children to the zoo for the day and our family and they met often as we followed the different trails to see the animals.

Joseph Merrick suffered from “Proteus Syndrome” and was known as “The Elephant Man”.

‘Tis true, my form is something odd
but blaming me, is blaming God,
Could I create myself anew
I would not fail in pleasing you.

The above was a rhyme used in Merrick’s sideshow pamphlet, and which he was said to have often quoted, followed by the lines:

If I could reach from pole to pole
or grasp the ocean with a span,
I would be measured by the soul
The mind’s the standard of the Man.

If you read the link below and follow the sequence of ideas there, you will no doubt think of several scripture applications.

Even though Elephant Man used the upbeat quote in his traveling show, he apparently was not an upbeat personality.  With such an albatross to carry his whole life, who could blame him?  Later his fortunes seemed to take a better turn.  After his rescue from the abusers in the travelling show, he apparently became a happier person, and for a time tried to overcome his attitude of “I can’t bear it here.” However, he eventually committed suicide by letting his heavy head hang down on his chest to stop his own breath.  For those who knew him later in his life, his new, better attitude was what made it such a shock that he took his own life.

One of the strongest scriptures for those who are depressed about their limitations or their circumstances would be what Paul said to the Philippians.

Not that I speak in respect of want: for I have learned, in whatsoever state I am, therewith to be content. 12 I know both how to be abased, and I know how to abound: every where and in all things I am instructed both to be full and to be hungry, both to abound and to suffer need. 13 I can do all things through Christ which strengtheneth me. (Phil 4:11-13).

There may be many passages to help normal people to deal with their own reactions to handicapped individuals, but of course “normal” people do not always do what they know they should.  The handicapped may reflect on these verses and understand how they should be treated and pray for those who are either ignorant of the commands or unwilling to follow God’s directive.

Then Peter opened his mouth, and said, Of a truth I perceive that God is no respecter of persons:35 But in every nation he that feareth him, and worketh righteousness, is accepted with him (Acts 10:34-35).

My brethren, have not the faith of our Lord Jesus Christ, the Lord of glory, with respect of persons. 2 For if there come unto your assembly a man with a gold ring, in goodly apparel, and there come in also a poor man in vile raiment; 3 And ye have respect to him that weareth the gay clothing, and say unto him, Sit thou here in a good place; and say to the poor, Stand thou there, or sit here under my footstool:4 Are ye not then partial in yourselves, and are become judges of evil thoughts? 5 Hearken, my beloved brethren, Hath not God chosen the poor of this world rich in faith, and heirs of the kingdom which he hath promised to them that love him? 6 But ye have despised the poor. Do not rich men oppress you, and draw you before the judgment seats? 7 Do not they blaspheme that worthy name by the which ye are called?  8 If ye fulfil the royal law according to the scripture, Thou shalt love thy neighbour as thyself, ye do well:9 But if ye have respect to persons, ye commit sin, and are convinced of the law as transgressors (James 2:1-9).

The next time you see a handicapped person, don’t stare!  Go up to them and speak to them as if they were a real person, because they are.   They seek acceptance and friendships just like you and I do.  Shame on all of us if we treat them differently.

8 thoughts on “BE NOT WEARY: Dealing with a Handicap”